Whether it is the element of surprise and ever looming danger, or an interest in earth science, volcano’s have always fascinated us.  Hot Hot Volcano online slots revolves around the theme of these natural fire-breathing fiends.

Symbols include fruit, a monkey, a vividly coloured tropical bird, an ancient creature resembling a dinosaur-like lizard, as well as a selection of playing card symbols, including the numbers 9 and 10, a Jack, Queen, King and an Ace, all seemingly hand carved out of colourful rock.

The image of an erupting volcano represents the wild symbol.  It appears only on reels two, three and four.  Landing a combination of 3 or more on the specified reels, will trigger the erupting volcano free spins round.

Landing a combination of 3 or more of the erupting volcano wild symbols on the reels mentioned above, will cause the entire centre reel to expand into a wild reel, and 5 free spins to be awarded.  The expanding wild will stay in place for the duration of the 5 free spins.

As an added bonus, the volcano symbol will erupt, exhaling wild symbols onto the reels during the free spins, increasing the chances of landing matching combinations of symbols.

The gamble feature is available for use after any winning combination.  Activating this feature can result in winnings being doubled or even multiplied by 4.  Guessing the wrong suit or colour of cards will however result in substantial losses. 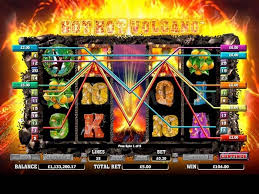 Bets range from 0.01 credits to 2 credits per line played.

Sound effects resemble those that you might find in a typical rain forest, and the colour theme is vivid and intense.  Images used throughout the game are simple, yet functional in creating the general feel of the theme.

The game interface is user-friendly and easy to navigate.

Hot Hot Volcano can be accessed online using a computer, as well as from a mobile device, making it widely accessible to a variety of players.

The jackpot is non-progressive, and tallies in at 1000 credits.