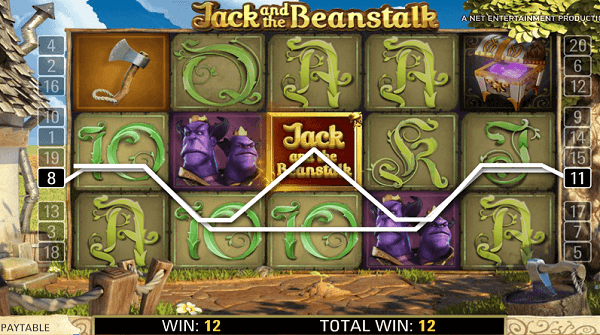 Jack climbs the stalk, happens upon a magical realm in the skies ruled over by a cruel giant, and ends up robbing the villain of his riches, racing back down the beanstalk and chopping it down before the ogre can get his hands on our hero, killing the monster before any real harm can be done.

Jack and the Beanstalk Slots in 3D

This casino slots game renders the theme a far more adult one, and wagers of between 0.01 and 0.5 can be made, with a maximum of ten coins per line allowed. Thusly, the minimum wager for the game is 0.01 and the top bet 100.

The playing card icons are the lowest paying ones for the game, with each of them featuring a revamp in order to suit them to the Jack and the Beanstalk theme. The top prize for these is 100 coins for five aces appearing. The more rewarding symbols include a weathered old watering can, the axe that proves so very necessary by the story’s end, a goat, the evil two-headed giant, and our hero, Jack. Matching five of the Jack symbols will garner a 1000 coin payout for the player.

Like onlineroulette.net.nz/baccarat, Jack and the Beanstalk can be played from a variety of platforms, from desktop and laptop computers to smartphones and mobile devices, and can be played in both free and real money modes.

Jack and the Beanstalk Bonus Features

The wilds for Jack and the Beanstalk are known as walking wilds, and these are the logo for the casino game. Each time a wild lands, a respin is triggered, with the wild icon moving one reel to the left. As long as a wild is present on the reels these respins will continue, with the symbols walking to the left until they disappear from the screen.

All wins accrued in this manner are multiplied by three, and these are able to substitute for all the other symbols for the game, except the scatter and bonus icons. The wilds can also appear while free spins are being played, and can also take the form of three of Jack’s treasures, namely a bag of money, a golden hen, or a golden harp.